What I tell myself everyday.

To all the people watching, I can never ever thank you enough for the kindness to me, I'll think about it for the rest of my life. All I ask is one thing, and this is.. I'm asking this particularily of young people that watch: Please do not be cynical. I hate cynicism - for the record it's my least favorite quality, it doesn't lead anywhere. Nobody in life gets exactly what they thought they were going to get. But if you work really hard and you're kind, amazing things will happen. I'm telling you, amazing things will happen." - Conan 'O'Brien 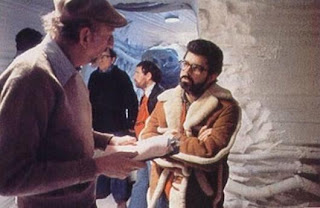 Compared to the New Hope and ROTJ commentaries, I really enjoyed this one. Because of Irvin Kershner.

His notes and comments about film making in general shows a man who really enjoys his work and his time making this movie. There is a sense of excitment and purpose in the way Mr Kershner explains his experiences of making the movie. Some basic but very helpful pointers. I really wished I was in his class at USC that he is teaching.
I have compiled some of his comments into point form below for my own references.
- Within a scene, the rythm of the actors, the rythm of the speech, the rythem of the movemeent, the rythm of the staging. This is locked in time. This is the biggest guess of all
- 2nd Act of a film -> more characterisation and less action. The problems are explained and a advertisement for the 3rd Act.
- The length of the cuts are important to the rhythm of the film. Necessary to keep the rhythm of the film. On staging of scenes within the cut, I have to keep the rhythm going. So its the same pace, same rhythm. A lot of guess.
- Showing the reaction of it (an exertion) is important. like being chocked, and the chock is released.
- The more difficult you make it for the hero, the better it is.
- Hitchcockian principle - You need a terrific antagonist for the protagonist to flourish.
- Emotionally healthy
Violence isn't usually the issue for younger people. Its really how the violence is portrayed and the consequences of the violence. And what it means in a cultural context. Do they have respect for human life ?
1 comment: Links to this post