What I tell myself everyday.

To all the people watching, I can never ever thank you enough for the kindness to me, I'll think about it for the rest of my life. All I ask is one thing, and this is.. I'm asking this particularily of young people that watch: Please do not be cynical. I hate cynicism - for the record it's my least favorite quality, it doesn't lead anywhere. Nobody in life gets exactly what they thought they were going to get. But if you work really hard and you're kind, amazing things will happen. I'm telling you, amazing things will happen." - Conan 'O'Brien

On 'You Are Not So Smart' by David McRaney 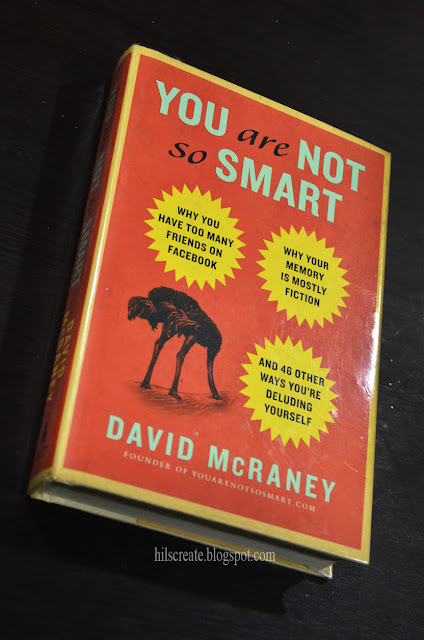 Originally the blog writer of psychology blog You Are Not So Smart, David McRaney decided to share his love of psychology with traditional book readers. I was intrigued by the rather cheeky blog title when I first came across McRaney’s blog under ‘Misc Links I Like’ of Hilscreate, yet I wasn’t convinced that mere words could strip me of ego to admit that I am lesser than I thought.

I was utterly wrong. Halfway through the first chapter of You Are Not So Smart, I was already persuaded that I knew very little about myself and my actions.

McRaney discusses different aspects psychology with relevance to the happenings of our daily lives, as stamped on the book cover: Why we have too many Facebook friends? Why memory is mostly fiction? He outlined events which we can all identify with, like this......

“Have you ever had a conversation in which some old movie was mentioned, something like “The Golden Child” or maybe even something more obscure?
You laughed about it, quoted lines from it, wondered what happened to the actors you never saw again, and then you forgot about it.
Until…
You are flipping channels one night and all of the sudden you see “The Golden Child” is playing. Weird.
The next day you are reading a news story, and out of nowhere it mentions forgotten movies from the 1980s, and holy shit, three paragraphs about “The Golden Child.”
You see a trailer that night at the theater for a new Eddie Murphy movie, and then you see a billboard on the street promoting Charlie Murphy doing stand-up in town, and then one of your friends sends you a link to a post at TMZ showing recent photos of the actress  from “The Golden Child.”
What is happening here? Is the universe trying to tell you something?”

......and provided the underlying psychological explanation:

“No. This is called the frequency illusion.
Since the party and the conversation where you and your friends took turns saying “I-ah-I-ah-I want the kniiiife” you’ve flipped channels plenty of times; you’ve walked past lots of billboards; you’ve seen dozens of stories about celebrities; you’ve been exposed to a handful of movie trailers.
The thing is, you disregarded all the other information, all the stuff  unrelated to “The Golden Child.” Out of all the chaos, all the morsels of data, you only noticed the bits which called back to something sitting on top of your brain.
A few weeks back, when Eddie Murphy and his Tibetan adventure were still submerged beneath a heap of pop-culture at the bottom of your skull, you wouldn’t have paid any special attention to references to it.
If you are thinking about buying a new car, you suddenly see people driving them all over the roads. If you just ended a long-time relationship, every song you hear seems to be written about love. If you are having a baby, you start to see them everywhere.
When the frequency illusion goes from a passive phenomenon to an active pursuit, that’s when you start to experience confirmation bias. Confirmation bias is seeing the world through a filter, thinking selectively. ”


McRaney backed his explanation with careful research and relevant statistics, strongly elaborating each topic with coherence and simplicity, mixed with a dash of witticism and mild sarcasm. Besides that, his use of day-to-day examples makes psychology a more approachable subject. I also particularly appreciate that one chapter deals with one topic at a time, making it easy to absorb and not be too concerned about losing track of the book's content.
McRaney challenged and showed us how deluded about ourselves we actually are. Actions that we thought were made through a series of careful consideration could be nothing more than a simple psychological trick that happened somewhere in the murky depths of our unconsciousness. We aren’t such logical and rational creatures after all.

*Some topics from the blog and book are overlapping, though certain subjects available on the blog wasn’t included in the book.